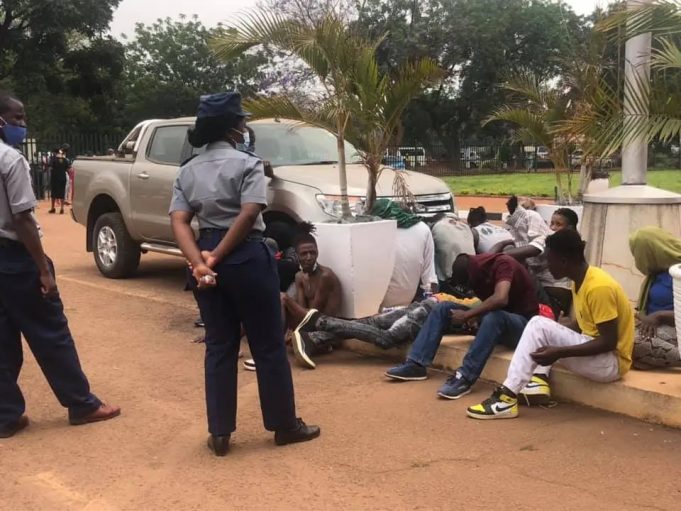 The 6 women and 10 men who were arrested over the weekend for attending the now-infamous “Kuwadzana Sex Party” were all freed on Monday. The 16 were released on free bail when they appeared at the Harare Magistrate’s Court.

All 16 appeared before Harare magistrate Barbra Mateko. They were not asked to enter a plea and were instead remanded out of custody on free bail.
This follows reports that the 16 spent most of Monday at the courts as the authorities struggled to come up with an appropriate charge to justify their arrest.
According to the Zimpapers Television Network (ZTN), the 16 were initially charged with disorderly conduct when they were arrested by the police. However, when they went to court on Monday, the state prosecutors are reported to have dropped that charge arguing that it was improper.

The charge was later changed to soliciting for sex. However, the state prosecutors are reported to have objected to this charge deeming it unsuitable given the circumstances. When the courts adjourned for lunch, the authorities were yet to find a suitable charge for the 16.

'No charge yet for sex party suspects'

It is not clear what charge was eventually preferred against the “Kuwadzana Sex Party” participants when they appeared in court later on.
However, the owner of the house in question, one 35-year-old Reyn Mabva who is being charged with turning his house into a brothel, was remanded to Tuesday on $3 000 bail.
Although the lewd party was advertised as taking place in Kuwadzana, it actually occured at House Number 618 Monaghan Road, Tynwald South, Harare.

Mabva and the alleged organiser of the party, one Moleen “Empress Molly” Mashingaidze are said to have created flyers of the event which were circulated on social media platforms. Part of the flyer said,

“Bring only $20 to f**k all the ladies, Ecocash 200 RTGS to join the update group and ensure your commitment, 200 Rtgs will be used to buy co**oms and toiletries. Zondo and cold beer available at bottle store price, Come and let’s have fun ana Daddy.”

The authorities were notified of the party ahead of time by some concerned residents. The police are reported to have swooped in once the party was in full swing. When they arrived at the premises, the police found the 16 in one room in various states of undress.
After they failed to explain themselves satisfactorily all 16 participants were arrested.-iharare

St. Louis Mother Charged With Murder Of Her 5 Children