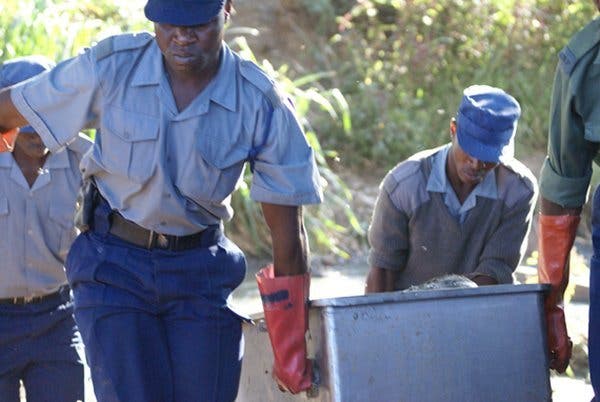 A Gweru man believed to be in his late 30s went berserk yesterday and killed his wife and two children with a log following a dispute over $1 that the woman had used to buy corn snacks for the children.

The man, Leo Kanyimo from Woodlands Phase 1, was later arrested after residents raised alarm over the bizarre incident.
National police spokesperson Assistant Commissioner Paul Nyathi confirmed the development.
“The man in his 30s started having problems in Woodlands, Gweru, and took a log and killed his wife, who was in her 20s, his 10-year-old son and an 18-year-old girl using a log,” Nyathi said.

“Neighbours heard some noise and saw the man running around with the baby he had killed. They alerted the police at Nehanda Station and he was arrested. We are still investigating the case.”
Some residents claimed that the 10-year-old boy was his son from another woman, who is in South Africa, after deserting him because of his violent disposition.
Neighbours claimed he had a misunderstanding with his wife over $1 and he verbally abused his wife while they were outside the house.

The wife got into the house and the man picked a log and followed her.
“Neighbours heard some noise from the wife, who was being hit by the log and rushed to the house, but failed to restrain him due to his state.”
He bolted out of the house with his fingers inside the mouth of his daughter, possibly to choke her.
He later used a log to hit her on the head and threw her lifeless body on the road before he was arrested.

One child, who survived the attack, is said to be under the care of neighbors.-Newsday