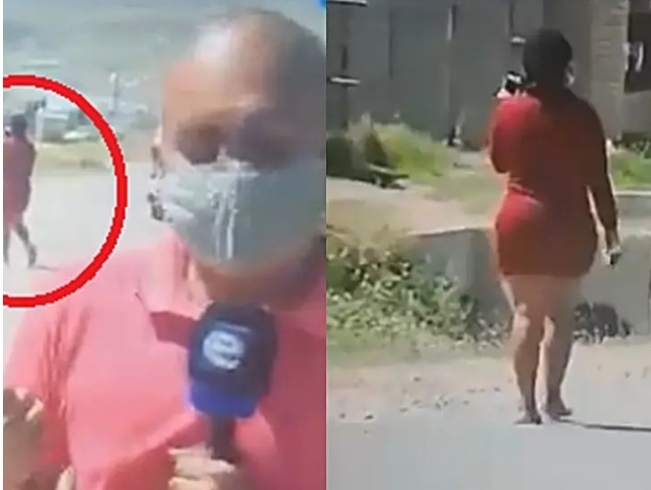 An eNCA cameraman could not hide his fascination for a woman walking behind the reporter he was filming during a live broadcast and apparently followed her through until she disappeared from his sight.
While the reporter is doing serious business reporting about the sorry state of the road behind him, the cameraman focuses his lenses on a woman walking on the road.
The cameraman just shows part of the road that the reporter is talking about while the woman in a red dress is well within the camera’s lens.

“Look at this road behind me, this is something the residents have been complaining about for a while,” the reporter says, coincidentally at the same time the woman in red gets into the shot.

As the cameraman tries to show the road, that’s when pleasure overtakes the business of the day and he starts following the woman.
South Africa is having their municipal elections today and many parties are contesting. The area where the video was filmed is in the Eastern Cape and tweeps have had a feast spinning the video to their parties’ favour.

One user said, “The ANC has failed us, look, even the cameramen cannot help but follow the woman in red who doesn’t like the red party vivaEFF.”

Another user said, “Which female do you know that is at work, who is a cameraman/camera operator that would zoom into another females behind mid news? (10 marks) let’s go!!”

I live in South Africa I know what it’s like.

Here are some funny comments made by social media users.

The cameraman went above and beyond by actually showing us the damaged road.