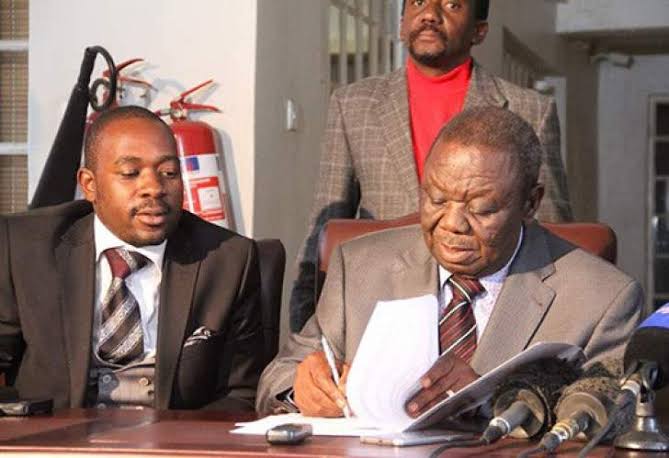 Opposition Citizens Coalition for Change (CCC) leader Nelson Chamisa said he rejected President Emmerson Mnangagwa’s offer to form a government of national unity government as a way of avoiding a mistake made by the late MDC founder, Morgan Tsvangirai.

Tsvangirai entered into a GNU with the late president Robert Mugabe in 2008 following violent elections that were widely condemned as not free and fair.

Mugabe was, however, accused of reneging on the deal and used the GNU era to further weaken Tsvangirai’s party, the MDC.
Chamisa accused Mnangagwa of unleashing violence against his supporters as punishment for turning down the offer for a GNU to stop the holding of the 2023 general elections.
Addressing thousands of CCC supporters at Sakubva stadium in Mutare on Saturday, Chamisa said:
We refused an offer for a government of national unity (GNU) and said let’s go to elections; those who have won will lead and those who lose will support the winners either as opposition or united government, but we will not make the mistakes we made under former late president Morgan Tsvangirai.
Chamisa accused Mnangagwa of setting up torture camps and bases to brutalise CCC members ahead of the 2023 elections.
A CCC activist in Kwekwe was fatally stabbed by suspected ZANU PF members recently, while several others were injured.

Chamisa was in Mutare to campaign for CCC’s aspiring legislators Regai Tsunga and Prosper Mutseyami, who are eyeing the Mutasa South and Dangamvura/Chikanga seats respectively.
CCC is also contesting a number of vacant local government seats in the Mutare