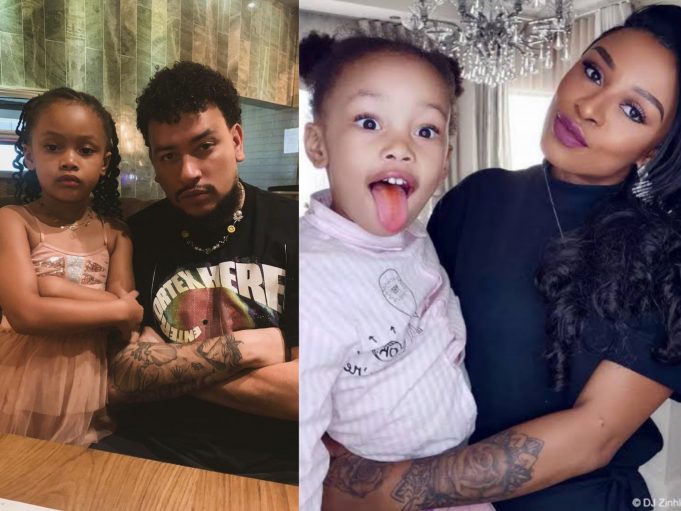 AKA Dragged For Celebrating DJ Zinhle For Mother’s Day. Rapper AKA gave a pretty unexpected response to troll who slammed him for posting his baby mama, DJ Zinhle, for Mother’s Day.

Yesterday, mothers were getting appreciated on their special day, and even if some broke up with their baby daddies, the men did not hesitate to gush over them.

Taking to social media to wish his baby mama DJ Zinhle a good day for Mother’s Day, AKA then added a purple heart to the post. In the post, his mother Lynn Forbes was also included.

Many people added their 2-cents about how they feel about this and some women said they would not know how to handle their boyfriend’s posting their baby mama’s.

Clapping back at a troll who could not understand why AKA posted Zinhle, he said, it’s called being mature.

“Those that say they don’t see anything wrong with their boyfriends posting their baby mama’s amaze me, lmao I’d perish,” the woman said. AKA clapped back and said, “It’s called … maturity. Being an adult. Try it. It’s lit,” responded AKA.

Another person displaying this level of maturity is his mother, Lynn Forbes who posted all the people in her life for Mother’s Day. She posted her mother, her sons Steffan Forbes and rapper AKA, as well their partners Brittany Smith and Nadia Nakai. She could not leave out AKA’s baby mama DJ Zinhle and her partner Murdah Bongz as well as her grandchild Kairo and Asante.

In the lengthy post, Lynn Forbes said, “As we approach Mother’s Day and as I reflect on motherhood, I am most grateful for my own mother and for what she has has taught me about love and family.”

“Raising a blended family, through many challenges, to live together in harmony and raise well balanced, happy children, is not always easy but it’s possible when everyone works together, in the best interest of the youngest children in the family. Thank you mom @janet.reed2 for your never-ending love and teachings.”

She explained why she mentioned the people she did, saying they play a huge role in her blended family. “To the people who make this family possible, thank you. You each have your own family and nothing can ever take away from the importance of belonging to that family, that is most important and always will be. But today, in this moment, as we celebrate mother’s and family…this family, beautifully blended, is not possible without you and the energy you bring, to make us what we are …a family.”

“Thank you for being authentically you,” she said.

AKA and Zinhle have showed people a long time ago that they have buried whatever hatchet they had. In her reality show Zinhle relayed desires to have a healthy blended family with AKA and Murdah getting along.

She also spoke about how she told AKA about her second pregnancy. “I spoke to Kiernan about the baby. He said I’m quite a rebel. ‘You have another kid, with another man’. He said your family must think you are such a problem,” she laughed.

“He said I need to know the details, so I said okay it is a girl. He said I was hoping for a boy, sit. My brother said it is not your baby and he said it kind of feels like it is my baby, I said wow, that is crazy,” she continued.

But Zinhle revealed how her boyfriend Murdah is not in a rush to accept the blended family, “Bongani is baby steps because I won’t lie… I thought Bongani is going to be the easy one about this whole thing and I thought Kiernan would be difficult but actually it is the other way around.”

“Kiernan is more open to the idea of having this family but Bongani is just taking his time. He is not in a rush and I also need to respect Bongani’s wishes and how he wants to roll this whole thing out,” she said.