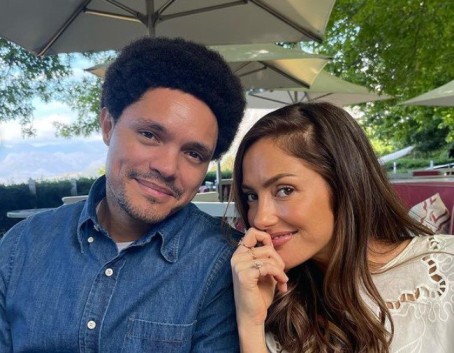 A source told People that the couple has gone their separate ways as things did not work out again. The source added that Minka would rather be single than to waste her time with the wrong guy.

“She is very happy. She’d rather be single than waste her time with the wrong guy,” said the source.Another one added that the couple have broken up for a while now. Trevor and Minka recently travelled to South Africa for a vacation and Kelly got to meet Trevor’s squad.

They spent time with Anele Mdoda, Sizwe Dhlomo, Khaya Dlanga, and Xolisa Dyeshana while on holiday. Anele even shared a photo of them out living their best lives and caption it “Makoti” which easily translated to bride-to-be.

We don’t know what went wrong this time around, but it seems they both wanted different things. Rumours of their affair first made the rounds in 2020. Trevor was seemingly ready to take their relationship to a new level as they were set to live together at his multi-million randmansion in Bel Air which costs between R380 million to R412 million.

Trevor is currently in mourning following the sudden death of his grandmother. He took to his Instagram account to share the heartbreaking news with his followers. “This morning our family laid to rest the oldest member of our clan Frances Noah, or as most of us referred to her, Gogo,” he said.

The comedian said every moment he spent with his grandmother was magical and said her home in Soweto was not just a home, but a refuge where woman would come when they had no place to call home.