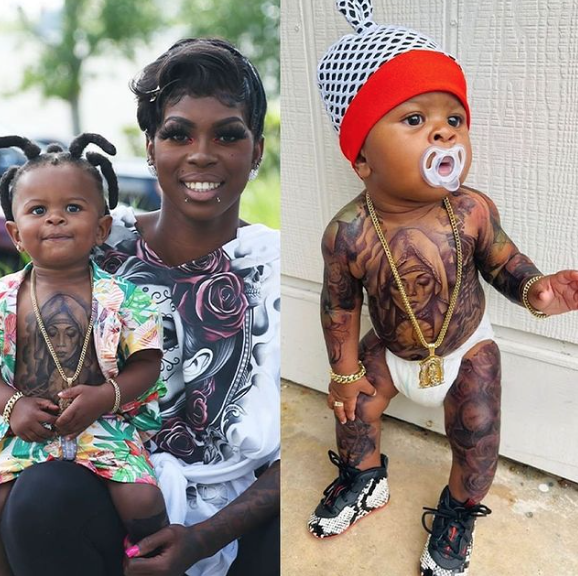 An ink obsessed mom in Florida has been slammed by many critics for covering her 1-year old son in tattoos.

While the tattoos on her son, Treylin Armani are fake, many say she’s raising her little boy to be a gangster and a thug.

Shamekia Morris, a fashion designer from West Palm Beach, Florida is covered in tattoos herself.

The 29-year old doesn’t care about the opinions of others over her choice to cover her son in tattoos.

“I get a lot of hate, people say I’m raising him as a gangster and a thug. I don’t care, he looks cute.”

Morris is such an ink obsessed mom that she held her maternity photoshoot inside a tattoo parlour.

Her toddler is already a huge sensation on social media and has already amassed 1.5million followers on TikTok.

Morris has been covering her son in tattoos when he was just 6-months old. The stick-on designs wash off after a few days and the mom and son often rock similar outfits to display their tattoos.

Some of the criticism Morris receives are harsh and people often tell her that her son will grow up to live a life of crime.

“They say he’s going to grow up and be into drugs and spend his life in prison. To anyone who is passing judgement on my boy just know that you’re wishing the worst on a baby. This is the lifestyle we enjoy and there’s no harm in it.”