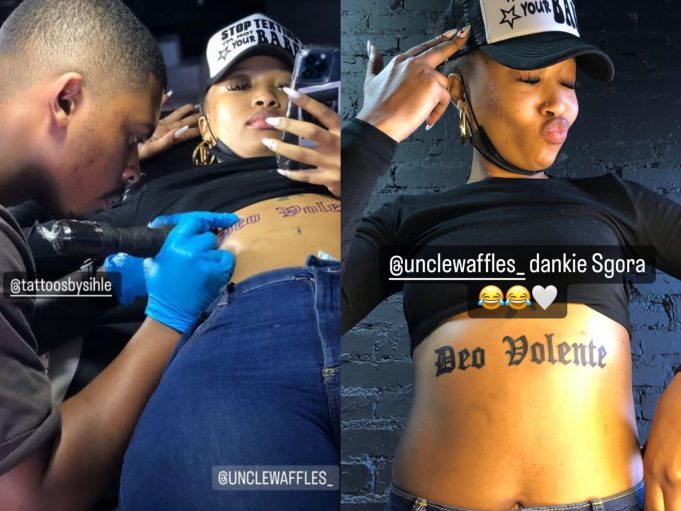 Uncle Waffles’ life is always in the spotlight, thanks to her fast rise to fame in the entertainment industry. Every little thing she does is put out in the public eye, which comes with much scrutiny. When it comes to the young DJ, she has always found herself at the centre of attention on Twitter and being the punchline to several jokes.

Taking to her Instagram, Uncle Waffles shared with her fans her new ink work, and instead of praise, she has found herself being ridiculed. The tattoo is put across her abdomen, and it says ‘Deo Volente, which is Latin for God willing. Some people use it to put out the message that if nothing prevents it, it is meant to be.

The meaning behind the tattoo is significant, and many Tweeps agree that it’s a great message to ink on one’s body. However, the font of the tattoo has left many people cracking up with laughter. One Twitter user who goes by the name of Chris Excel has compared the tattoo to the font used by people when writing the heading on a curriculum vitae.

However, as much as most people are making fun of the tattoo, others are saying it’s her body, and she can do whatever she wants on it. Others are saying she put it up on a public platform, so she should have been prepared for both negative and positive reactions.