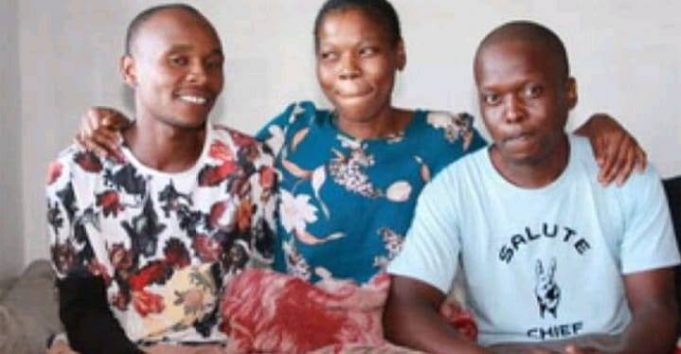 Woman in love with two men under the same roof. A photo of the woman, who is alleged to be living with
two of her boyfriends, has been making the rounds on social media.

It seems like a lot of men are not impressed. On the other hand, the ladies are ecstatic. They have been praising the lady for managing to get her two men to meet.

Polyandry is legal in Mzansi but it’s very bizarre to find a lady living with two men under the same roof in South
Africa.

Men on social media are disgusted by this and said no woman should ever be with two men at the same time.

“I see a lot of ladies are happy and encouraging this, but this is wrong on so many levels.
“I don’t believe that ancestors would bless a polyandry marriage. It’s wrong!” said James Matlhala.

Sinikiwe Mkhonza said it’s funny how so many men are quick to bash this while they have been feeding women
polygamy ideas for decades.

“They’ve been forcing polygamy down our throats but now that the tables have turned, it’s disgusting? That’s
shocking to me, honestly,” said Sinikiwe.

Lihle Ngwenya said this has motivated her to introduce her side man to her main boyfriend so that they can all
live happily ever after.

“She looks happy and I can’t even begin to imagine how their bedroom life is,” she said.
Dudu Mkoneni said her cousin tried to do this but it quickly turned into heartbreak when her boyfriend of
four years dumped her.

“She wanted to be a hero for social media people and it cost her the love of her life.

“I hope ladies will think hard about this before making any decisions,” said Dudu.