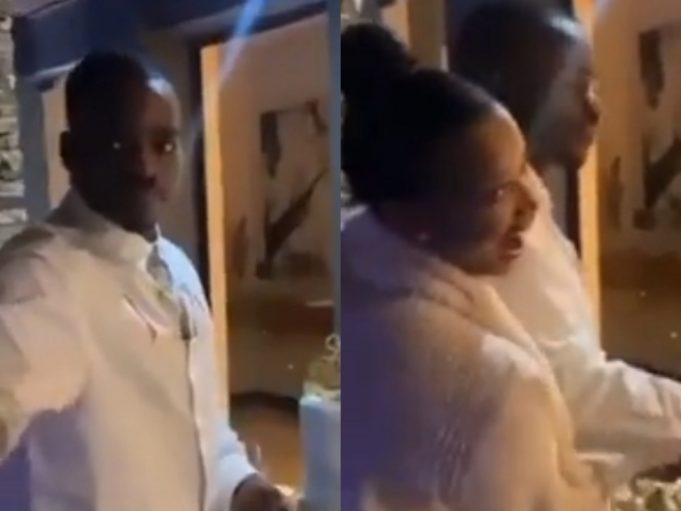 After months of trying to hide her baby daddy and keeping her relationship private, Ayanda Thabethe’s mystery bae has finally been uncovered. Controversial Twitter blogger Musa Khawula has once again managed to worm his way into Instagram’s close friends and share a video that was shared by the beauty influencer.

Ayanda might have made the uncovering of her bae easier when she shared snaps from her Dubai vacation. On her IG stories, she ‘accidentally’ shared a picture that shows her phone’s screensaver and it is a picture of her and READ her baby daddy.

A close friend on IG then leaked a video of her and the man cutting a cake together in front of a crowd.

Before that, her mystery bae was uncovered as a married man but Ayanda quickly refuted that. The same blogger, Musa said, “Ayanda Thabethe’s ‘dream man’ and baby daddy Peter Matsimbe is a married man. Besides Peter dating everybody he is married to Shannen Thring and they have two children together. It is said Shannen moved out of their marital home after Ayanda gave birth.”

But Ayanda denied being involved with a married man.

Ayanda had been on the news after her relationship with Andile Ncube got questioned. She clarified that they never broke up because of any sinister reason but because they were unhappy. “I’m at a point in my life where I’ve moved on and turned a beautiful chapter with people I care about more than anything and I don’t want anyone to cloud that with false information. Give me facts I’ll take them, don’t lie about my life.””I think we’ve spoken about this 10000 times and I’m sure he is bored to repeat himself. But this is a very amicable situation, no drama here. Sorry to disappoint you,” Ayanda clapped back at a troll.

There were speculations that their marriage ended because Andile allegedly cheated with another man. But Ayanda refuted these claims.

A Tweep sparked this rumour when he said, “And when are we gonna discuss how Ayanda Thabethe nearly killed herself after finding your legs opened high in the sky for another man.”

Ayanda clarified what happened between them, “At times the truth is neither sexy nor juicy which is why people refuse to hear it. I repeat, NO SUCH THING HAS EVER OCCURRED in my life as has been spoken about.

“This is not in defense or the protection of a particular person but to outlay the truth of my own story. I don’t get why anyone’s sexuality should still be making news if we regard ourselves as a society that is accepting of people’s sexuality and their right to convey those choices publicly or not… I find it hypocritical…” said the beauty influencer, “The whole part. All of it is false. Fake news. Lies.”