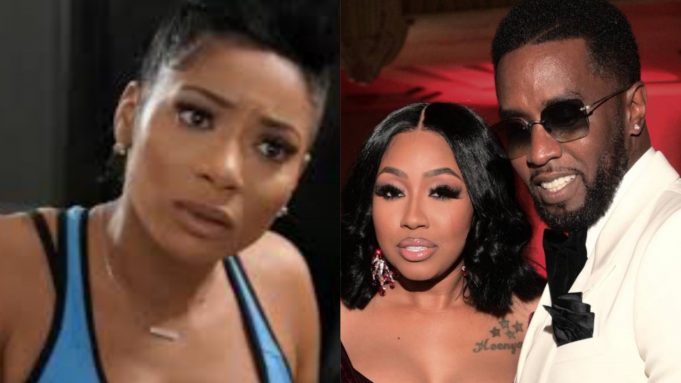 Tommie Lee from Love and Hiphop is known for her crazy and Confrontational behavior , well she is a hot topic on social media, again. Hours ago, a clip of Tommy supposedly confronting one of Yung Miami’s associates made rounds over Diddy.

People are now talking about Tommie’s latest incident which involves an associate of City Girls star Yung Miami. In a video obtained by Gossip of the City, Tommie seemingly calls the associate out for laughing at a comment written on a post made by The Shade Room.

An altercation did not take place. However, some people have still been critical. And Tommy responded on Instagram Story. She wrote, “I wish y’all understood that everything isn’t tea or news. Two grown people can’t have a conversation w/o a camera being pulled out **** really sad.”  Tommie continued, “And no I don’t fake kick it, fake speak, or fake anything…so when you dissing me that better be really how you feel because I’m moving accordingly!”

Tommie Lee had a lot of drama during her time on “Love And Hip Hop Atlanta.” Her biggest feud was with Joseline Hernandez. They clashed over Stevie J. Joseline started to suspect Tommie and Stevie had a thing behind her back. So she started coming for Tommie. Tommie returned the energy and things supposedly escalated away from the cameras.

Joseline accused Tommie of trying to hit her with a car while she was pregnant with Bonnie Bella. Joseline filed a restraining order and Tommie was furious that Joseline got the police involved. And she thinks this was a very dirty thing for Joseline to do.

To no surprise, Tommie and Joseline were never able to get past their issues. Joseline ended up leaving the show and eventually found success at Zeus Network with “Joseline’s Cabaret.” Tommie also made an appearance on the streaming platform when she filmed “The Conversation” with Akbar V.

They have feuded for years after a rumored scuffle at a recording studio. And fans had a lot to say about that episode. Some felt like it wasn’t a good look for Tommie.