Tommie from Love and Hiphop continues to carry her bad reputation even on other Television shows and in her real life.. Well it’s always Tommie Lee versus Everybody and boy is this girl ever wrong because everytime she is right when she is always drunk and tries to fight be it her friends or anyone.

This time she could be facing some jail time for trying to fight off a male employee and calling him a Coon after she failed to pay her hotel room. It was also after her altercation with Baddies West Co-star Stunna Girl which was also taped and went viral.

Stunna Girl Speaks After Allegedly Getting Jumped By Affiliates Of Tommie Lee After The Two Got Into A Physical Altercation #BADDIESWEST pic.twitter.com/zpYs4V2LyG

We all know Tommie’s history and her over thirty mugshots??? She was recently trending over some black City Girl mess with Yung Miami and her team but one thing people noticed was she was just calm and collected whilst asking the right questions.

Love and Hiphop Atlanta star Tommie clapped back at critics on July 5 after the former reality star celebrated her freedom by reminiscing about her time in and out of jail, which she said began when she was 14 years old.

The 38-year-old grandmother of one said while shouting out to her supporters,”This is year number three, since I have not gotten in any mother  trouble. It’s a big deal for me.I’ve been going to jail every year and shout out to everyone who has been rooting for me, I appreciate y’all. “ 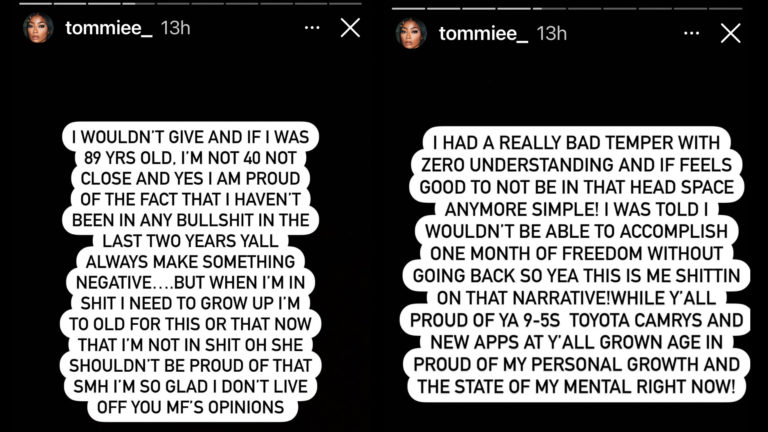 She said that she may have a bad temper, she is incredibly grateful not to have the same mindset she had years earlier.