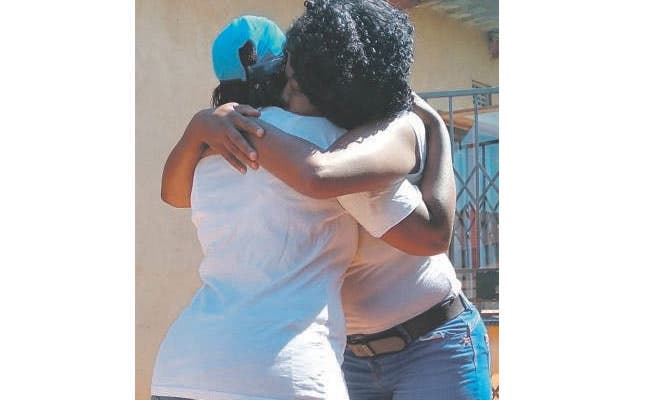 Thembi a 37-year-old lady from Ekurhuleni shocked her fiance after informing him that they can only get married if he also agrees to marry her twin sister Thembisile.

It would be a joy for every man to be given such a wonderful ultimatum, but according to Sipho it is not as he is refusing the once-in-a-lifetime offer saying it goes against his religious beliefs to have two wives.

Thembi and Thembisile Ndlovu who live in Edenpark, Ekurhuleni are orphans who lost their parents at a very young age and vowed that they will never be separated.

Sipho Njomane (40) took a further step in their love and he went down on one knee as he popped the question ‘Will you marry me’, to the love of his life Thembi.

To his surprise, Thembi replied: “YOU MUST BE READY TO TAKE MY SISTER AS WELL. YOU MUST MARRY US BOTH!”

Thembi said that she loved Sipho but wasn’t sure about how he would take the ultimatum.

“I love Sipho, but I can’t marry him and leave my sister behind.

“We knew we had to stand together no matter what.

“We vowed that if a man loves only one of us, he’s not good enough for either of us,” she said.

Sipho explained to Daily Sun that his Christian beliefs did not allow him to marry two wives and that he was afraid of being expelled from his church if he married the twins.

“I don’t know what to do. I’m getting old and Thembi is the right person for me,” he said.

However, the twins’ uncle Mr. Mathunjiwa Ndima (71) weighed in saying it was okay for the girls to marry one man.

“To marry one and leave the other behind can cause problems. It’s better if they marry the same man to stay as close as they are.”

Mtimande Ngwenya a cultural expert said Sipho had hit the jackpot marrying two women for the price of one.

He also said that marrying twins will not have any conflicting problems with religion saying: “It’s not like marrying two different people from different families.”

The couple met in March last year at a pharmacy when she had gone to buy medication and groceries for Thembisile who was not feeling well at that time.

“I shared with Thembisile about the guy, and when he invited me for a date I went her with me and we always went out together.

“Sipho proposed in December, but I told him he’d have to marry us both,” she said.